PULLING trucks might not seem like fun to most of us, but it’s all in a day’s work for town strongman Scott Hughes. 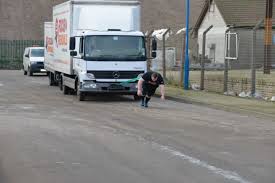 Scott was bitten by the strongman bug as a youngster when he used to be glued to the TV watching competitions from around the world, but as he got older he decided to try it out for himself.

His next event takes place in Allendale in May at a regional heat and he knows a good display there could see him qualify for national finals.

Later in the summer, Scott will then take part in the UK Truck Pulling Championships.

“I’ve always had an interest in it, but I didn’t start training in the gym until I was 18 and people quickly started saying I was strong for a young lad.
“That gave me confidence, and made me determined to push myself to the limit to see what I could lift.”

As well as training with Elite Strongman Promotions in Consett with ex-Olympic weightlifter Bob Dalglish, Scott has converted a lock-up into his own personal fitness centre, fitting it out with weights and benches to allow him to keep up his strict training regime.

Scott, who works as a doorman and also does some bodyguard duties, added: “You have to stay focused, but this is something I’m taking seriously and I want to go as far as I can in it.

“It’s not just about the training, I have to eat right as well. I live on protein shakes, high protein breads, eggs, rice and fish.
“I also spend about £120 a month on meat, so it can be expensive but it is a real passion of mine.”

Not content with lifting weights, Scott has recently taken a fancy to truck-pulling after being encouraged by pals at Focus Removals, on Hartlepool’s Park View idustrial estate.

He went on: “This has become part of my training, and I enjoy that as well.

“Focus has a seven-tonne van and a five-tonne one as well, and I’ve ended up pulling them both.

“You have to push yourself to the limit, whether it is lifting weights or pulling trucks.
“Now I can do the trucks, I want to pull a double decker bus.

“If you don’t set high targets then you will never achieve them.

“My ultimate goal is to turn professional, but it’s an expensive business and I’d love to hear from any firms who can sponsor me.”